Instagram has over 600 million monthly active users, not bad for a company that started just six years ago. This is the go-to platform for sharing high-quality photos with the world, and it has changed the way we blog and use social media.

Now, anyone with a smartphone can produce great content and grow a loyal fan base with their Instagram photos. It's not easy to gain a huge following, but did you know that you can kickstart that process by purchasing Instagram followers. Starting from scratch on social media is quite a challenge, and buying followers is one of the quickest ways to get your account seen by more people.

Some bloggers are paid five figures by brands just to post with friends on the beach or at clubs, and experts say that brands spend more than $1 billion USD per year on Instagram posts. Want to get in on that action? Start by learning a bit about what you're up against, and start keeping tabs on the most popular travelers on Instagram.

There are so many great Instagram accounts you can follow, especially when it comes to traveling. If you’re looking for some inspiration for own account or your next trip, check out our list of some of the best Instagram travel accounts that might just make you pack your bags and hop on the next flight outta there! 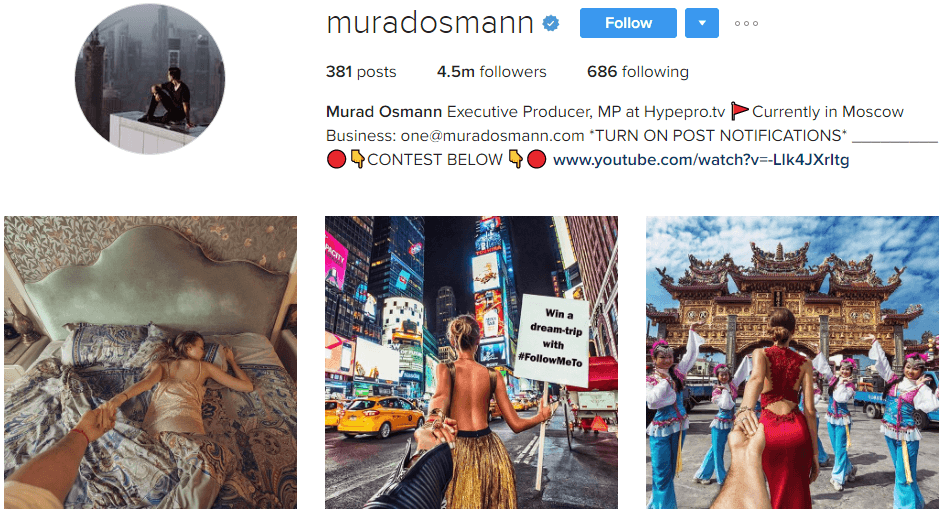 Moscow-based photographer Murad Osmann travels to different destinations around the world in pursuit of his #followmeto project. What made this guy one of the most-followed travel accounts are his signature photos: hand-in-hand with his wife, Natalia Zakharova, whose back is faced to the camera.

The first ever snap of #followmeto started as an accident when Nataly got frustrated of Murad taking pictures during their trip in Barcelona. The photo went viral and was noticed by tourism boards and luxury brands. Now he has more than 4.5 million followers and many more collaborations still coming in. 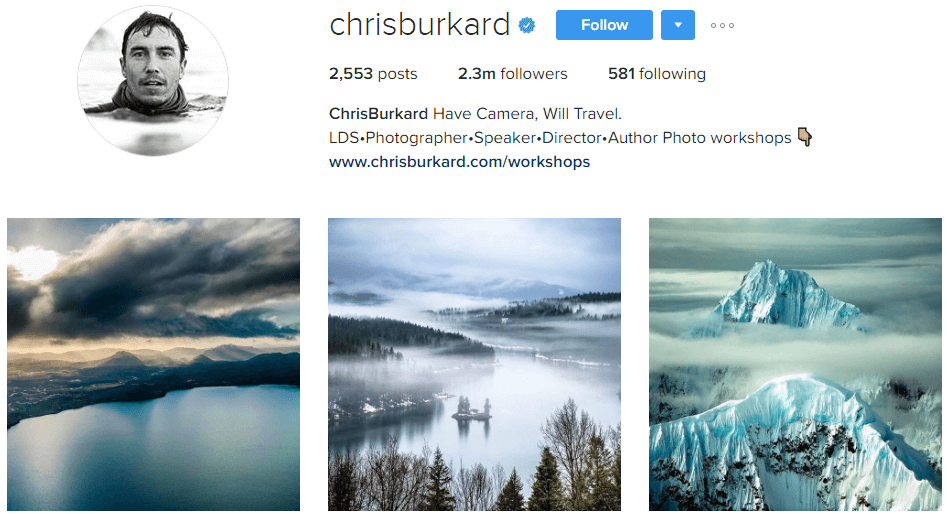 A world-class photographer and TED Speaker, Chris Burkard has more than 2 million followers on his Instagram account.

Early in his career he worked as a freelance photographer for different editorial and commercial projects. He has shot 35 national and international covers of magazines including Surfer Magazine, The New Yorker, and National Geographic. Today, he serves as Senior Staff Photographer for Surfer Magazine while managing his Instagram account.

Burkard is known for his photojournalistic approach, mostly taken in frigid locations. He has shot on six of the seven continents, has published many photography books, and has received many awards for his work. 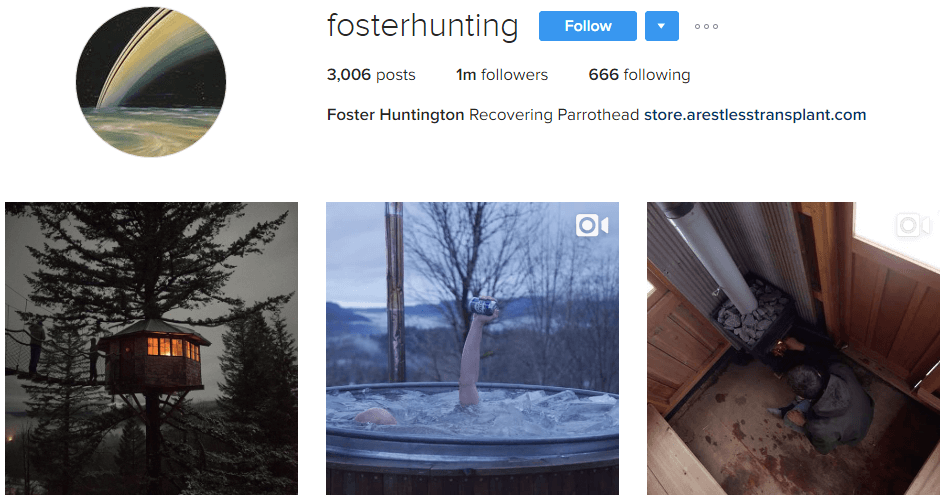 Foster Huntington quit his job as a designer for Ralph Lauren in 2011 and decided to travel the country while living in a van. A snowboarding and surfing enthusiast, he embarked on a trip driving around in a VW Syncro van and documenting everything with his camera.

He started a couple blogs, “A Restless Transplant” and “Van-Life” where he created a mini-movement and contributed to the community of people living a new nomadic way of life. He is now the face of brands like Patagonia and Urban Outfitters.

He has been living this way for almost 6 years now, showing people how to transform vans and buses into living spaces, building treehouses and cabins along the West coast, all while making this a profitable business. This is exactly what you will see on his travel Instagram account, and it’s a strong temptation for his audience to follow his footsteps. 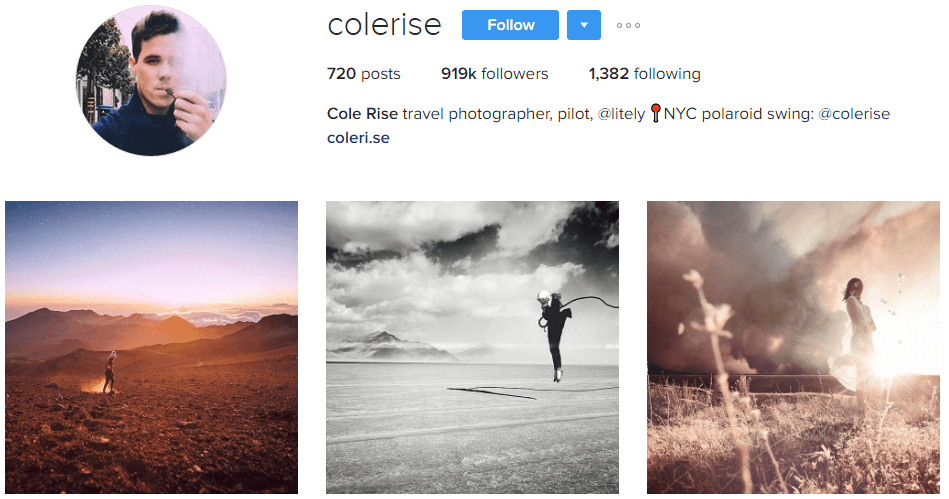 Cole Rise was one of the first 100 people on Instagram, user number 75 to be exact. He is also the one behind the photography app, “Litely,” which had over 300 million downloads on its first month.

He even created seven of the built-in filters on Instagram, one of which is called “Rise.” Clearly, this guy knows the mobile photography industry well.

His journey as a photographer and entrepreneur started when he licensed his first photo for a CD cover in 2005. Since then he has traveled across the country on a motorcycle taking pictures for Harley David, worked for the Norwegian tourism board to photograph their wilderness, appeared in National geographic, and shot New York Fashion week.

One more piece of trivia: a day before Apple was about to launch their Instagram app, the co-founder of Instagram, Kevin Systrom, called Rise to see if he could tweak the design of the app’s icon. In 45 minutes, Rise was able to create the Instagram icon we all know today. 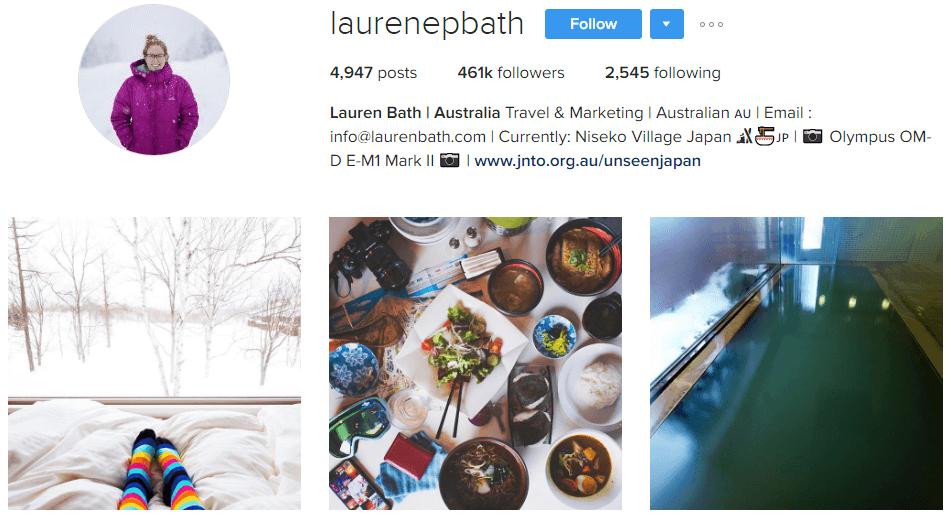 Lauren Bath is known as “Australia’s first professional Instagrammer.” If you’re someone who loves to travel, take photos, and post them on social media, then she has your dream job.

Her adventure started on a big risk when she quit her job to pursue her passion for photography, travel, and community on social media.

She claims she is one of the early adopters of Instagram, and just started taking photos with her iPhone. When she started gaining followers, she bought a DSLR camera to see if she could develop her skills as a photographer. From August 2011 to the end of 2012, she has gained more than 200,000 followers on Instagram.

Since then she has been traveling a whole lot, mostly three weeks per month around Australia and the rest of the globe. What a great adventure for a self-taught photographer. 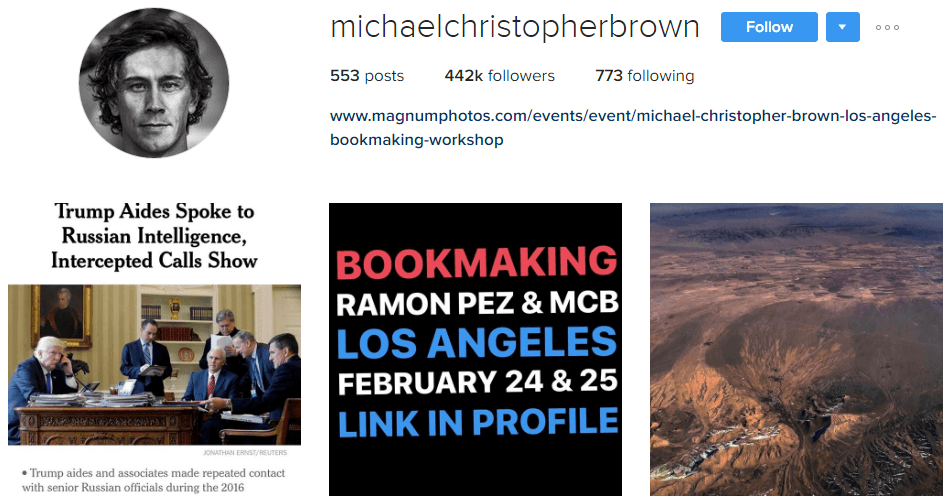 Christopher Brown became an Instagrammer by accident. He was assigned to cover events in Libya, but he dropped and broke his camera.

He didn’t let this stop him, though, and reported everything using his iPhone. From there he received assignments and requests to cover stories from his phone. He is known as “the guy who uses his iPhone in conflict zones.”

One way he attracted a big following on Instagram was by getting his pictures onto the feeds of people with millions of followers. In his case, his photos were always featured on National Geographic’s Instagram with his handle at the top of the caption.

Brown is not as active as he was before, as he is now based in Cuba where mobile internet is very poor. However, he uses his offline time to work and take more great photos. Travel the world all you want, but make sure your mom knows you’re okay. That’s the story behind Jonathan Quinonez’s Mom I'm Fine Fine Instagram account.

The 27-year-old from Brussels quit his job as a consultant, sold his car, and decided to travel. His first stop, Cuba, was a poor country which made it difficult for him to get in touch with his family.

Whatever he was doing, whether he was jumping out of a plane, diving, or even hanging out next to crocodiles, he finds a way to take the shot and give his mom the message. People are huge fans of his posts, admiring his photos and his love for his mom.

Quinonez says, “My dream is to continue this amazing trip around the world, still telling my mom that I am fine and making my friends laugh.”

Are You the Next Digital Nomad Superstar?

For many of the world’s photographers and aspiring travel bloggers, Instagram has become a vital platform for building a community. The digital nomads we shared in this article have proven that Instagram can create relationships, nurture budding photographers, and even help start and fuel businesses.

Even if you’re not ready to hit the road yourself, you can still grow your following fast by purchasing Instagram followers. This can be a great way to get a head start, just remember to check our recommendations and stick with a trusted company.

Whether you travel or not, don’t forget to focus on creating great content. Take the time to plan out your photos, and see if you can get your audience to get inspired and pack their bags!